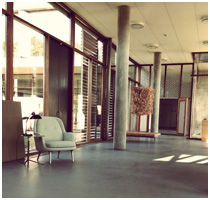 A Visit to Fritz Hansen: The Legacy and the Future

We recently had the opportunity to visit Fritz Hansen offices just outside Copenhagen to learn more about their philosophy in furniture making, as well as their vision for the future.

The Legacy Begins.
Fritz Hansen started in 1872, with specialization in decorative, wooden legs for tables and chairs. From there the company began to thrive. Steel then came into focus as Fritz Hansen began experimentation with the flexibility of the materials.

The Designers: Jacobsen, Kjærholm and the lesser-known Hansen.
The company is probably best known for its collaboration with Arne Jacobsen as well as Poul Kjærholm. Although I was most fascinated with Mr Jacobsen’s work (I own Ant Chairs myself), I was surprised to find that the Ant Chair almost wasn’t produced until Mr Jacobsen sold it to Novo Nordisk first for the use in their canteen.

Poul Kjærholm’s work was also a highlight. The PK25 Lounge Chair as a single piece of bendable steel was an achievement in itself – there are no joints or any other connections. We had to examine the chair up close to understand its design significance.

We also saw designs by Søren Hansen, the grandson of Fritz Hansen, which was actually quite modern – given it was in the 1920s!

Craftsmanship.
The PK25 Lounge Chair was one example of craftsmanship. Think about the Ant Chair and the Series 7 Chairs for example. Imagine 9 layers of veneer and 2 layers of cotton. Each piece of veneer is selected and matched for the grains in the wood, then it’s all pressed together in high pressure to create a chair that is virtually unbreakable, and then sanded and hand finished.

The Egg Chair is another one. In the studio pieces of leather is examined and then cut and sewn to perfection. Quality control is key.

The Future.
Modern still needs updating. Fritz Hansen continues to work with world-class designers, but is also looking into its portfolio on updating designs. The Drop Chair is an example. As the original drawings were non-existent, Fritz Hansen had to take an x-ray of the chairs (originally designed for the Royal Hotel) so they could figure out how it was put together. Then a modern touch was added and the chair was reborn. Further updates to Arne Jacobsen’s school desks are coming as well – I for one am looking forward to it.

Here are some other photos from the Fritz Hansen campus that is worthy of inspiration. Enjoy.

We recently had the opportunity to visit Fritz Hansen’s offices just outside Copenhagen to learn more about their philosophy in furniture making, as well as their vision for the future.