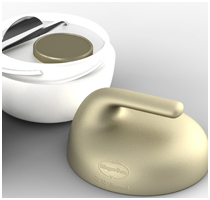 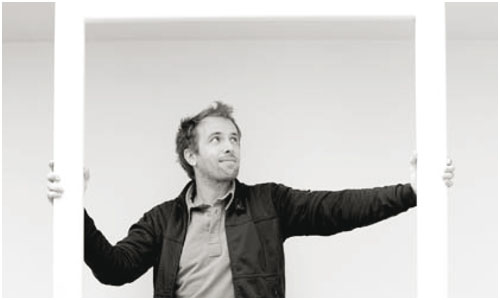 We all love ice cream. For those of you that are reading this piece, you most likely also love design. So how do you mesh the two together in a design project that involves ice cream? French designer Cédric Ragot has done this with 28’18” Moment, a project commissioned by well-known ice cream brand Häagen-Dazs as part of its 50th anniversary. We interviewed him in advance of the the unveiling for Milan Design Week during the Salone del Mobile (Milan Furniture Fair).

How did this project come about?
50 years of Häagen-Dazs, for me that doesn’t mean a serious ceremony, quite the opposite, that means that we can have a bit of fun. So when the idea of an anniversary objet was put forward, the response came with a sense of humour… the light play with the notion of “ice”… and why not a recognizable objet, removed from its original function! OK, so it would be the Curling, a game which is somewhat esoteric to us but for which we know that teamwork is completely essential. We are 3 artists brought together around the 28’18’’ moment, the Häagen-Dazs team, so get out the brooms and slider shoes! Only that it is not a gimmick, it is durable, practical…in short, a well thought out object, conceived and produced to be an object for day to day life.

28’18” – How was that actually measured?
28’18” was measured quite simply by taking the average time to eat a pint of Häagen-Dazs [ice cream]. 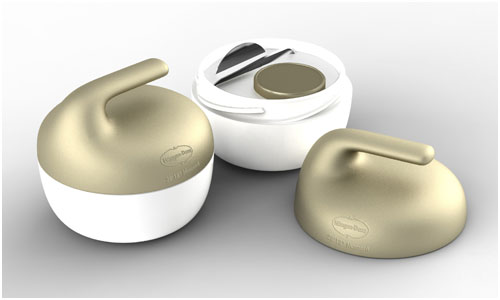 Can you explain a bit about the curved spoon in terms of material, curvature and how that relates to the ice cream experience?
A spoon to eat ice-cream with, surely not, too frustrating! I needed something that would compete with what is already out there, fit for performance and precision. I wanted to make a versatile objet, thinking along the lines of a drill, so as to dig out the pecan pieces to the surface. Twisted so as to be held comfortably in the hand, dipped in silver to give it a good weight, polished for those who appreciate a nice sheen and engraved for those who appreciate authenticity!

The price has not been announced, but should be around 100€, or around US$140, and will be available at select Häagen-Dazs locations and other stores.